Growing up, I spent my summers at the local pool. I’d go early in the morning for swim class and then go back in the afternoon. I’d stay until I was more wrinkled then a raisin. Sometimes I’d play a game in which I’d stand on the edge of the pool. I would pretend to be walking down the stairs, or stepping off a curb and I would casually drop my foot into the water. Physics would take over and the rest of my body would follow. If I did it correctly, I’d have the same lurching feeling in my stomach you get when you miss a step. Other times I would intentionally look the other way as I walked towards the water to fall comically into it like some comedian in a movie. I’d end up very wet, but excited and smiling.

Today we start at the end result. Simon Peter was in a boat, the water was calm. Wearing his sopping wet clothes, he was worshiping the messiah, Jesus. Beside him were his friends and fellow disciples. Excitement and adrenaline exuded from every pore of his body. He had probably never felt so insanely alive, like someone who had just reached the summit of a mountain.

Moments before, Jesus had fished him out of the lake. Simon was crying for help, afraid of drowning. He had cried out for Jesus to save him and immediately Jesus pulled him out. Simon was drowning because of his lack of faith. Fear had gripped his heart. For a moment he had noticed the intensity of the wind and the power of the storm and had sunk into the water, terrified. He had been walking on the waves towards Jesus. Every step he took was unbelievably miraculous. His brain had told him that the entire experience was an impossible dream, yet – as he walked towards the author of his faith – it happened. He was walking on water. 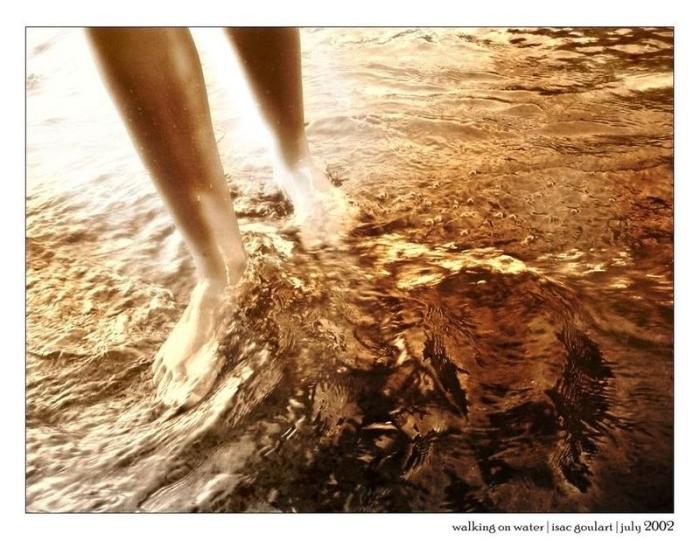 How he ended up on the water is even stranger. While in the boat, Simon Peter responded to what seemed to be a ghost on the lake. he had said:

It was not completely reckless, the ghost had said “Take courage, it is I, do not be afraid.” The other disciples were completely terrified, uncertain if it was Jesus. But Simon offered to step out onto the water. He didn’t say “Jesus, if it’s you… wave” or “If it’s you, tell me what we had for lunch?” or “Please jump up and down.” Instead, the disciple said to Jesus – “Tell me to come.”

Why did he do it?

Shortly before this encounter on the water, the disciples were on the boat together, rowing against strong winds. They were struggling with bad weather and almost completely spent after a long day. Jesus had immediately put them on the boat after a very tiring evening. Jesus would send away the crowd of 5000 people to whom the disciples had served fish and bread. Miraculous fish and bread. The disciples had suggested to Jesus to send the crowds away. However – after a long afternoon of teaching and healing – Jesus decided the crowd needed to receive food also. So he borrowed a boy’s lunch and with it multiplied it. After all, many of these people had walked a long way to find him.

The crowd had followed Jesus to a secluded place. Jesus had just lost his cousin John the Baptist, beheaded by an evil king for speaking the truth. Many of the disciples knew and loved John and grieved the loss of a friend and mentor. The death of John also shook everyone up, even Jesus. John had died, and Jesus knew he would go that path also. So immediately Jesus had withdrawn, with his troubled disciples, to a secluded place.  Life was wild, emotionally exhausting, brutal. They had needed a break, they didn’t get one.

Instead, God renewed them through worship on a boat. Jesus leads his disciples towards greater service and greater hardship… but also greater miracles. He teaches them to serve through grief and pain. He teaches them to give when they have nothing, even in exhaustion. He scares them. He shows up in a frightening, awe inspiring way when they least expect him. When he shows up, Peter does what disciples do best: he steps out of the boat and joins him. Simon Peter then does the next thing disciples do best, he fails. But that’s okay – because Jesus immediately pulls him out. And as Simon Peter worships in this boat, the focus isn’t on the failure. It’s on the saving hand of Jesus.

And next time, when Jesus freaks Peter out, when he provokes an odd situation, when he induces change, the disciple has grown, he knows better who Jesus is. Peter knows that he can trust him better. He comes closer to believing that God’s power has provided everything he needs for life and godliness, through his relationship with Jesus.

That growing knowledge of God never happens if he doesn’t leave the boat.

In your life, Jesus will take you to grief, to sorrow, to secluded places, to amazement, to exhaustion, to storms, to fear … and then he’ll come to you, give you an opportunity to respond. When he does, respond, focus your eyes on him and step out onto the waves.

React – respond – step out of the boat. You have a Lord who wants you to participate in his work. He has enough students, he needs disciples – workers that will participate in the harvest. If the kingdom of God were a sports team; he wouldn’t want spectators, he’d need players. If it was a house, he would want builders, not tenants. If it were a garden he would want fellow gardeners, not flowers, or worse, weeds. Now you might be new to this talk about Jesus, it might be your first time thinking about this, and the point here is not to get you busy because otherwise Jesus won’t accept you. Jesus loves you and accepts you where you are at right now… but he is not done with you yet. He loves you too much to let you struggle on alone against the wind and storms of life. He has an project for you to participate in.

You’ll probably get wet, but it’ll be worth it.

One thought on “Simon Peter: Becoming A Disciple – Part 4”